Yesterday, I promised you a teaser, but it didn’t end up happening. So, today I thought I would surprise you with the first two chapters of Take Me with You!

We’re only two weeks away from release of the last book in Grant & Aribel’s story! Preorder your copy now! 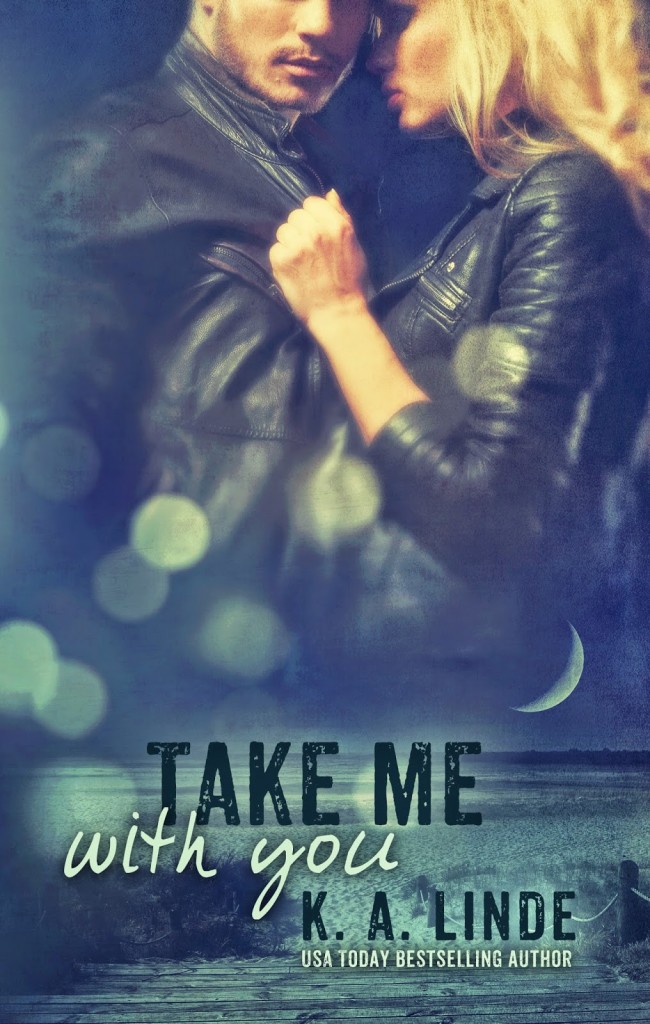 *spoilers if you haven’t read Take Me for Granted*

I’d never given much thought to falling in love.

For someone like me, it’d seemed like an impossibility. Why
dwell on something that would never happen? I’d had no interest in chicks for
more than what they could give me in one night. Fuck ’em and then show ’em the door.

There were always clinger groupies, who would claim to love
me. But they loved what I could offer them—sex, a one-night stand, a story to
tell their friends about how they’d slept with a rocker, with

My eyes slid over to the blonde sleeping in my bed. I
brushed a strand of hair out of her mouth and pressed a kiss to her lips.

That was before Ari.

“Grant?” she whispered in her sleep.

My name on her lips was better than a thousand one-night stands.

I’d almost lost her to a whole lot of stupidity. Some
groupie slut, Kristin, had come on to me at the ski lodge where my band,
ContraBand, was playing the Poconos music festival. And by come on to me, I meant she had stripped down naked in my room and
ambushed me, thinking I’d fuck her desperate ass. Ari had walked in, and all
hell had broken loose.

After a month of miscommunication over Christmas break, we’d
reconnected on the shore at my uncle’s beachside pizza place, Duffie’s.

The past two weeks, we’d been pretending that nothing had
happened, but I knew something was brewing behind her big blue eyes.

“Yeah, Princess?” I said, sliding my body against hers. My
hand ran over the dip in her waist and down to the curve of her tight ass. I
tugged her closer to me, rocking her against my dick.

Ari really hadn’t believed me when I said my appetite was
insatiable. I could fuck her all day long, and it wouldn’t be enough. I’d still
want more. Sex had been my escape for too long for me to ignore the pull now
that the same person was frequenting my bed.

I rolled her onto her back and kissed my way down her front—between
her breasts, over her soft stomach that often made her self-conscious from my
attention, to her hip bones that peeked out from her cotton underwear, and down
between her legs. My breath came out hot and urgent as I blew on her through
the material. She whimpered and writhed in my grasp.

“Grant…Grant.” Her words were a moan, an encouragement.

My fingers hooked under the elastic and pulled them off. She
stiffened beneath me and pushed herself up to the top of the bed. I reached for
her, but she shook her head.

“I have class.” Ari looked at the comforter, the desk, my
cherry red guitar—anywhere but at me.

“I need to shower and change.”

“Don’t worry about it.” She slid off the bed and shrugged on
her jeans. “Don’t you have to work at the recording studio today?”

I’d gotten a job working at a studio in Trenton when I
wanted to show Ari that I was serious about something other than playing in a
band. Her dad was the CEO of a bank in Boston, and I’d never seen money like
that before. I couldn’t give her that, but I wanted to.

I wanted to throw her down on the bed and fuck her until she
stopped suggesting ways to keep us apart. But I couldn’t finesse my way into
that—at least not with Ari. She would call me on my bullshit.

“Okay. Well, I’ll see you after work then,” she said,
sidestepping the issue.

She threw her cardigan back on, tossed my old man’s dog tags
over her head that I’d given to her last semester when I asked her to be my
girlfriend, gave me a peck on the lips, and then dashed out of the room.

I crashed back into bed and stared up at the blank ceiling. I
didn’t fucking understand what had just happened. I had my fucking girlfriend
back. We were fucking together all the fucking time.

Yet I felt like the pussy getting ditched after a one-night
stand.

I roughly slammed my hands down on the steering wheel of my
BMW. What the hell was wrong with me?

I couldn’t believe I’d run out of Grant’s bedroom like a
crazy person. I wanted to sleep with him.
I wanted to be with him. But I had
been acting like a total idiot, and if he hadn’t already noticed, then he
certainly had after that spectacular performance.

Unlike most people my age, I actually knew who I was, and I’d
never pretended to be anyone but myself in a relationship. Not everyone liked
that I wasn’t afraid to speak my mind, and I didn’t need someone else for my
own personal validation.

Then, Grant McDermott had walked into my life.

He loved everything about me that intimidated other guys. He’d
push back when I tried to pull away. He fought for me and sacrificed for me
and…loved me.

And lately, all I could think about were the million logical
reasons that we would never work, like the fact that ContraBand had been selling
an insane number of copies of their new single, “Life Raft”—a song Grant had
written for me last semester. They weren’t hitting the Billboard charts, but I saw fame on the horizon even if Grant acted
as if he didn’t. As much as that excited me, it also terrified me. I couldn’t
think about losing him.

Not to mention, there was the scary fact that his dad was
about to get out of prison where he had resided for the last thirteen years
after murdering Grant’s mom in front of him.

On top of that, we’d never really talked about what had happened over Christmas break when we were
apart. We’d both swept it all under the rug, assuming it was fine now since we’d
slept together, but there was still so much we needed to address, so we could
move forward and trust each other. Our month apart had been a reality check
that things weren’t always going to be perfect between us, and after we’d gotten
back together, it was easier to ignore that than to face it head-on.

Plus, I still hadn’t even told him about Henry, the guy who
worked for my father. My parents had tried setting me up with him, and he had
kissed me while I was drunk one night in Boston. It had only happened because I
thought that Grant had slept with some groupie slut on New Year’s. But still…he
didn’t know about it, and this would never work out if we couldn’t be honest.

I shuddered. The last person I wanted to think about was
Henry.

Parking at the apartment that I shared with my three crazy
roommates—Cheyenne, Gabi, and Shelby—I bounded up the stairs and went inside. Since
Grant and I had gotten back together three weeks ago, I hadn’t been home this
early in the morning. I usually kept a change of clothes at his place and would
leave for campus from there. Staring at my roommates’ surprised faces after I’d
barreled through the door, I could see they thought three weeks seemed more
like a year.

“What are you doing home?” Cheyenne asked. She flipped her
crazy red hair over one shoulder and cocked an eyebrow. “Shouldn’t you be in
the throes of passion or whatever?”

I rolled my eyes and kept walking toward my room. “What?
Just because I’m home early one morning, I haven’t been in the throes of
passion? Jeez, I don’t see you and Vin together every morning.”

“Whoa! Chill. Vin and I aren’t even dating.”

“That’s because he’s a douche bag.” I pushed open the door
to my room and leaned against the doorframe, waiting to see Cheyenne’s
response.

“Would the both of you shut it?” Shelby asked. “This feels
like last semester all over again with you two bickering like an old married
couple.”

“We do not!” I said defensively.

“She doesn’t like to give us the goods,” Cheyenne
complained.

Shelby looked at Gabi for backup, but she had her nose
buried in her laptop while dripping milk from her cereal onto the table.

“You guys can’t sit there and act like you don’t want to
know what’s going on with them.” Cheyenne threw her hand out at me.

“Actually, since she’s never home, I assume that the sex is
pretty amazing,” Gabi said, looking at her computer screen.

“I never thought she’d be the one to go from proud holder of
her V-card to sexpot living at her boyfriend’s house in a matter of a couple of
weeks.”

I hadn’t even considered what my roommates might be saying
about me while I was away. I knew that I’d made a drastic change in my life by
agreeing to date Grant, but I’d thought they would be happy for me. Maybe they
were, and this was their backward way of showing it.

“Anyway, I have to get ready for class.”

I disappeared into my room and changed into a purple V-neck
sweater and jeans. Instead of taking the time to straighten my hair, I pulled
it up into a tight ponytail at the nape of my neck. After applying some mascara
and baby-pink lip gloss, I made a hasty retreat.

“You know,” Cheyenne said when I walked back into the living
room.

“You’d think you’d be in a better mood with how often you’re
getting laid.”

I slung my backpack over my shoulder. “I probably would be
if you stopped badgering me about it.”

“Yeah, Cheyenne. If she wanted to tell you how big Grant’s
dick was, she probably would have already,” Shelby cut in.

“Grant would probably show you before I’d tell you,” I said,
crossing my arms over my chest.

“Noted,” Cheyenne said with a wink.

“Cheyenne!” Shelby cried. “You’re not going to ask Grant to
show you his dick.”

“You’re right. That doesn’t sound like me at all.” Sarcasm
dripped out of every word.

Laughter bubbled up out of me. I couldn’t help it. I’d been
on edge all morning, and now, I was clearly losing my mind. I was sure that it
all had something to do with my crazy course load and the issues with Grant. I
wished I knew why Grant and I couldn’t work out our problems. When we had gotten
back together on the beach, I’d thought the worst was over, but I had a feeling
that the worst was yet to come.